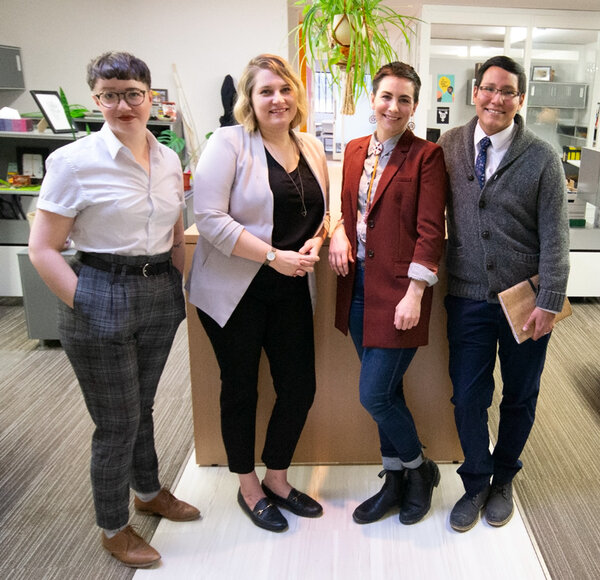 For nearly 30 years, OUTSaskatoon’s locations had discrete entrances. The centre was located in other buildings, sometimes behind unmarked doors.

Last year, that all changed. The organization moved into new digs on Avenue C, with clear signage and a bright rainbow on the front of the building.

“Saskatoon, as a community, was very ready to have a more visible queer organization,” said Loewen Walker. “The climate was right for us to kind of come out as an organization.”

There aren’t many organizations like OUTSaskatoon in Canada—centres with paid staff, doing both short-term community work and long-term visioning to enact change. Of the few that do exist, OUTSaskatoon is one of the largest.

The organization has a community drop-in centre, counselling and social support groups, and a sexual health program, and hosts many events. A new initiative is Pride Home, which offers housing for youth. The organization is also involved in research projects and is often called upon to advise on policy.

Sometimes people need immediate help, whether that is counselling, access to the food bank, a ride to the hospital or even just a cup of coffee.

‘We are in a family’

Walking into the centre, you’re greeted by a friendly receptionist who’s ready to help anyone who stops by. The space is open and bright, and the people there are welcoming. This workplace culture is no accident; they’ve cultivated a commitment to hospitality.

The positive vibes serve another purpose as well: To support staff in the sometimes difficult work they’re doing.

She said it can be incredibly emotional work.

“Our entire existence is in the game,” Guthrie said. “It’s not something that I can separate from myself. When I have people say homophobic things to me in a session I can have my professional hat on, but then I’m going to go to my car afterwards and I need some time to debrief.”

Thanks to OUTSaskatoon’s workplace culture, though, her co-workers understand these challenges and are very supportive.

“We are in a family. We’re not just co-workers. We’re people that know each other’s needs. . . . We strive to be a place where people can acknowledge anxieties or tough times that they’re going through.”

OUTSaskatoon uses education as a tool in its work to eliminate homophobia, transphobia and other issues that negatively affect the queer and trans community.

One of the aspects of Guthrie’s work that excites her the most is to see people understand queer identities for the first time, “to be able to see those light bulb aha moments where people finally understand an identity that was polarizing before.”

It’s also important to her to see people who have felt isolated and alone finally feel connection and support.

“When you’re a minority or marginalized person, community is something that helps you get through the day-to-day,” she said.

“I love being able to see people happy,” he said.

Saddleback is OUTSaskatoon’s cultural and projects coordinator, a “Jack of all trades,” according to him, and resident keeper of the dad jokes, according to his co-workers. His work at the organization centres around Indigenous engagement, cultural events, Reconciliation and decolonization.

In particular, he appreciates the nuances that OUTSaskatoon takes towards its larger missions and goals.

“What brings me the most joy is that we realize we can’t just be one place—we can't just be a one-stop shop. We need to have this work be everywhere because it’s tied into all aspects of our identities,” he said.

When Saddleback was a USask student, he worked at the University of Saskatchewan Students’ Union (USSU) Pride Centre and was on the USSU executive as vice-president of student affairs and president.

“(Academia) is an interesting realm for folks who are from marginalized backgrounds, from educational experiences that haven’t been the kindest,” he said. “It’s quite difficult to even see oneself being in those particular places—but then also trying to thrive in those places can be triply hard, because you’re having to deal with so many day-to-day factors and also underlying factors.”

Despite those challenges, Saddleback said he’s had a great relationship with USask. His experiences at the university opened his eyes to systemic discrimination in society and encouraged him to work to create change.

‘Education and knowledge is power’

The staff at OUTSaskatoon are tasked with inspiring change in the community, but they also have an impact on each other.

USask alumna Jessica Fisher (BA’11) said her OUTSaskatoon co-workers have had a huge impact on her life.

“I’ve been able to receive an education from Jack and from other people to sort out my identity so much more deeply because I haven’t had fear holding me back,” she said.

Fisher is a Métis person and a settler, and she identifies as Two-Spirit.

“This is the first organization where I've been able to be my whole self without editing. It’s been a place where I’ve been able to explore my identity and figure out what that means to me in a safe, supportive environment,” she said.

Sometimes when people from the queer community reach out for help they don’t get the support they need. The project’s goal is to provide education, training and resources for professionals so they can better respond to the needs of the queer community.

“Education and knowledge is power,” Fisher said. “People don’t wake up and want to do harm, typically, but they do harm because they don’t know better.”

Gender-based violence research is OUTSaskatoon’s biggest academic project right now. The Department of Psychology at USask’s College of Arts and Science has a three-year partnership with the organization to do an evaluation, literature review and environmental scan.

Fisher’s work is currently focused on collecting the voices and lived experiences of queer community members who have had interactions with service providers, and learning what the gaps are and what’s missing.

“The thing that excites me most is this idea that we are building a braver province,” she said. “We need to ask these hard questions, we need to have these challenging conversations, we need to look at our own personal bias and say, ‘What can I let go of? Where did I learn that?’ ”

Bringing the classroom to the community

Before starting at OUTSaskatoon, Loewen Walker was a sessional lecturer at USask in women’s and gender studies and philosophy. She was also a researcher with the Indigenous Peoples’ Health Research Centre.

She had volunteered with the organization many years ago when it was called Gay and Lesbian Health Services. When the position came up, she saw it as an opportunity to bring together all of her theoretical training and education—to bring the classroom to the community.

“We don’t need academics separate from community; we need that place in between where we are working together,” she said.

That’s easier said than done, though. Loewen Walker said nonprofits often don’t have the time or the capacity to do research.

“So many nonprofits are doing such incredible, innovative work and it’s never getting tracked,” she said. “It’s just deciding between documenting and writing up a report on this new, innovative method versus serving the person in front of you.”

There’s a gap in research about the queer community that Loewen Walker is hoping partnerships—like the one with USask’s Department of Psychology—will help to fill.

OUTSaskatoon has also done a pilot evaluation of Pride Home and partnered with the Saskatoon Council on Aging to examine the challenges faced by 2SLGBTQ older adults.

As well, the organization is often tapped for policy advice and recommendations. In April 2019, Loewen Walker and board chair Martha Smith provided testimony to the federal government’s Standing Committee on Health to make recommendations about 2SLGBTQ health in Canada.

When Loewen Walker started in her role six years ago, OUTSaskatoon had five people on staff. Now there are more than a dozen staff members. The organization is also increasingly working in collaboration with other agencies across the country.

The expansion has allowed OUTSaskatoon to tackle more and to extend its reach.

“It enables us to do things that we just never would have been able to do,” Loewen Walker said. “If we’re only focusing on what’s right in front of us in the short term, we’re not actually changing the world around us. . . .  It gives us time to see that long view, the bigger strategic plan.”

Reconciliation and decolonization through language

Most people are familiar with the acronym LGBTQ, which stands for lesbian, gay, bisexual, transgender and queer. Some people may have seen variations such as LGBTQ2S+, which is used to refer to lesbian, gay, bisexual, pansexual, polysexual, asexual, genderqueer, transgender, intersex, Two-Spirit, queer and questioning individuals. OUTSaskatoon is currently using the acronym 2SLGBTQ. The organization has moved Two-Spirit, a term that recognizes Indigenous views of sexuality, to the front of the acronym to recognize its commitment to Reconciliation and decolonization. 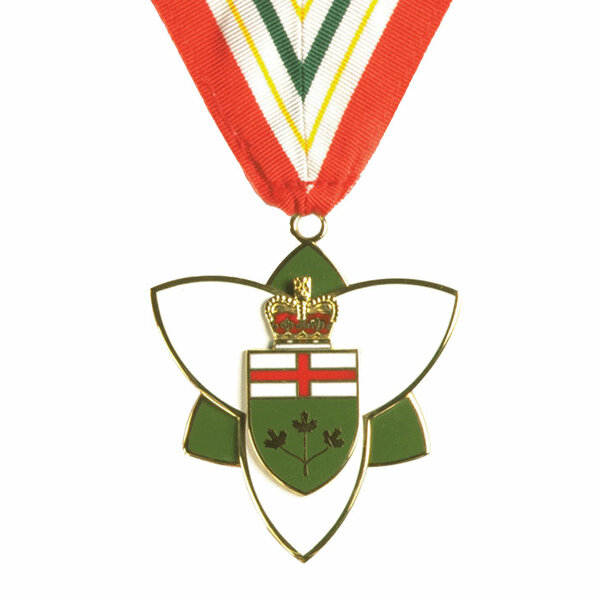 Alumna appointed to Order of Ontario 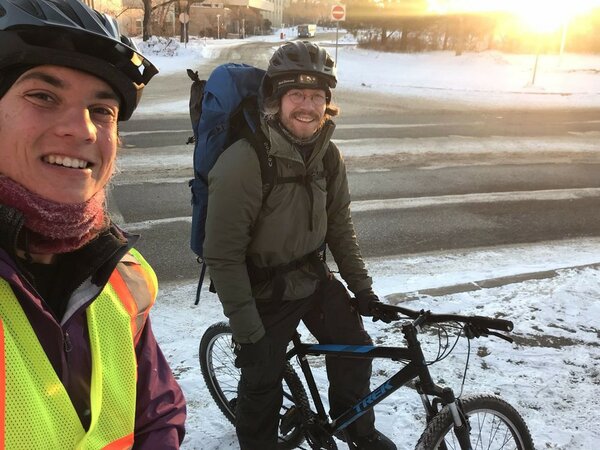 Geology graduate Iliajah Pidskalny (BSc'20) is riding his bike 1,600 kilometres from Saskatoon to Vancouver in the middle of winter 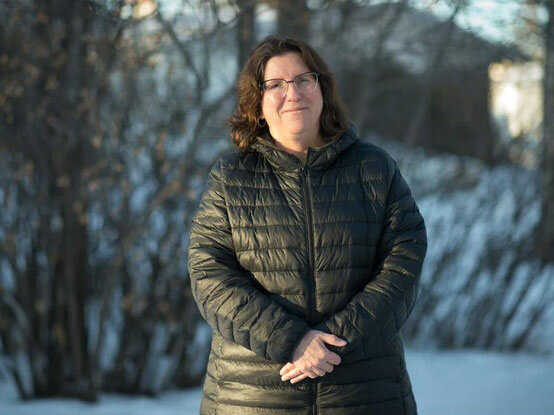 Joanne Weber (BA’80, BEd’87) thought academia was a world she would never enter 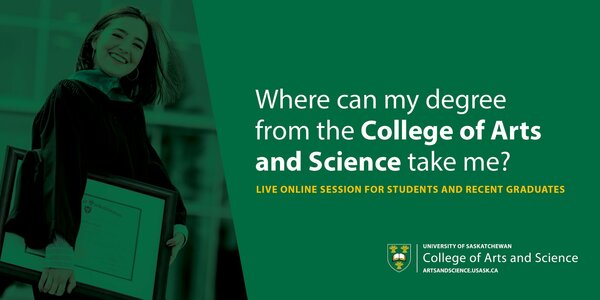 Where can my degree from the College of Arts and Science take me? Learn how to explore career possibilities 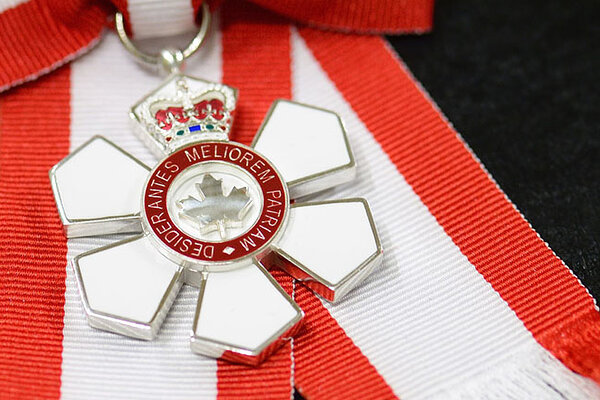 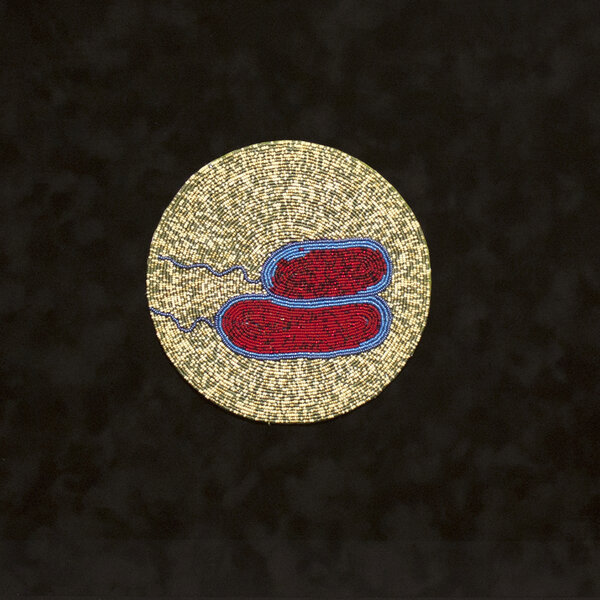 Beads in the blood: Ruth Cuthand, a Survey