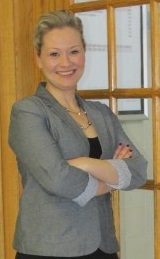 Elizabeth Scott is a modern British historian who has been named as the second U of S ICCC post-doctoral fellow. She grew up in a family that was interested in the past.

“My dad came to Canada in 1976 from London and always taught us about the British past,” she observed during a recent interview. Her mother , meanwhile, was a voracious reader of 19th-century British fiction.

“I've always felt pulled as the child of an immigrant to explore my Britishness. I never felt quite Canadian or British but something in between. Perhaps not coincidentally then, my doctoral work focused on the history of British-Canadian relations around immigration.”

As part of her interest in the historical colonial relationship between Britain and Canada, she investigated the charitable emigration schemes which, in late 19th-century London, were viewed as potential solutions to the urban poverty that plagued the city. Her post-doctoral project expands that work to farther-flung parts of the British Empire: Ceylon; The Straits (Penang, Malacca, Singapore); and Dingding (along the Malaysian corridor).

“I always tell my students there is a history of ‘everything’ which gives the scholar such creative freedom,” Scott explains. “The past explains and accounts for our current condition, be it political, cultural, economic; studying history has given me a deeper grasp of the big ideological forces in our world like patriarchy, capitalism, democracy, colonialism, feminism.”

“These forces have had tremendous impacts on gender constructs, race relations, and human rights. History has really clarified my own vision, values, and I how operate in the world as a person concerned with social justice and human rights. I come out of the school of historical thinking that we call the new imperial history, one that is highly critical of empire. We consider the way that imperialism oppressed indigenous species to extract resources and settle new communities.”

In the process, she examines how health and environment were impacted, “not to celebrate (the notion of) empire but to consider how empire was problematic.”

Scott and her research are housed in the Department of History’s Historical Geographic Information Systems (HGIS) lab, where her work with Professor Jim Clifford adds an unexpected interdisciplinary element.

“We draw on historic and geographic methods, using software that creates maps and spatial data, which gives us a chance to think about the past spatially. This opened me to thinking about how migrants interacted and reacted with the spaces and places they encountered, and about connections between human movement and the physical and ecological environment in this colony,” she says.

“Colonialism was tangible (in those situations). Because I study migration and used to work as an immigration officer … I see so many parallels between the 19th-century migrants I study and the clients I worked with at Citizenship and Immigration Canada. We obviously live in a very different time but basically these are families looking for a better life or were displaced by conflict and trauma or fell in love with someone from a different country – and all kinds of other unique stories in between. Their stories are often eerily similar, which I find fascinating.”

Scott is using the Trading Consequences database (her supervisor, Jim Clifford, was one of the creators of this site, which uses thousands of documents to explore commodity trading in the 19th-century British Empire) to search through correspondence. Her goal is to understand what it was like for those transplanted scientists, writers, journalists and workers to live in a figurative hothouse.

“What emotion can we extract from the letters? What can we learn about environment? What did migrants think? What did they think they wanted to do to it and extract from it for Britain?” she asks. “I am particularly interested in using online research tools traditionally used for genealogical research, like www.ancestry.com, to track migrants and explore their stories.”