Therapy dogs much more than a pet project 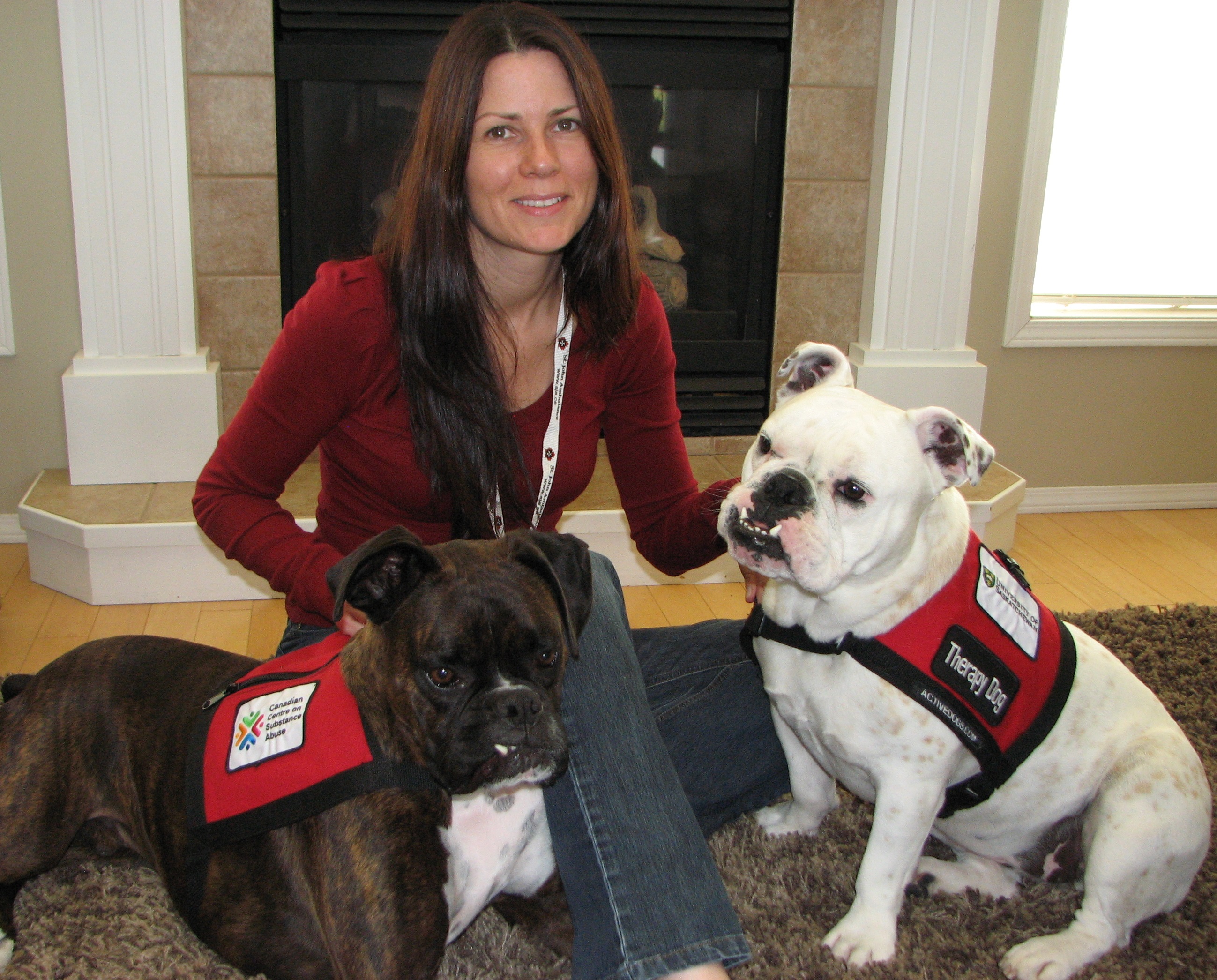 It’s lunchtime at Saskatoon’s Calder Centre. The smell of roast beef and vegetables wafts through the residential addictions treatment facility, which sits neat and inconspicuously on the corner of Taylor Street and Arlington Avenue. The hallways are quiet as clients enjoy their meal in the canteen.

Around the corner in the common area, Colleen Dell sits on the arm of a leather sofa, gripping her dog Subie’s leash tight as he pulls, spying a potential target for his wet kisses. Lunch is a little late today. The brindle boxer, his St John’s Ambulance therapy-dog bandana tied smartly around his neck, is eager to start socializing.

Minutes later two teenaged boys come around the corner. One has a thick spike through his ear lobe, the other pulls his long hair into a ponytail, carefully avoiding his eyebrow piercings.

“Hi puppy,” says the ponytailed boy as he wraps gangly arms around Subie’s neck. Subie responds with slurps from his rather lengthy tongue. The other teen proudly launches into a story about his own dogs, who he says were rescued from a puppy-mill by his mom.

Another teenaged boy swaggers up the corridor, swigging a chalk-like substance out of a water bottle. Spying Subie, he melts, dropping to his knees to give the dog a good rubdown. "His little tail is just going nuts," says the boy as he tells the story of his own dogs, to no one in particular. It’s as if he and Subie are the only two beings in the room. "Oh my gosh this is the awesomest dog ever,” he sighs, dropping his milky water bottle to bury himself completely in Subie’s thick brown neck.

“There was one girl here for two weeks who couldn’t hear or speak, and her sign language was in Dene,” whispers Dell, a University of Saskatchewan professor who holds a chair in addictions research. “I brought Subie to the Calder Centre as much as possible during her stay. We spent up to two hours a day with her, a non-communicative girl who had been using drugs to kill her feelings. This girl loved Subie so much. The joy, the feeling this animal brought her . . . there was no need for words.”

From the other side of the Calder Centre’s 12-bed youth wing bounces a young blond girl, beautifully styled from top to toe, including impeccable hair and makeup. She taps her long manicured fingers on the tiled floor to get Subie’s attention. "I get to go home today and see my puppy," she croons, a big grin on her face as the boxer does his slobbery best to remove her makeup. She has completed her 28-day program and is in the midst of packing.

Dell has devoted her life to the research and treatment of Saskatchewan residents battling addiction. She spent five years facilitating equine (horse) therapy through the Sturgeon Lake First Nation. She is currently on a one-year sabbatical to study the question of what therapeutic impact domestic animals have on patients. In addition to Subie, Dell has another St John’s certified therapy dog (a female bulldog named Anna-Belle) who spends much of her time visiting the residents at Saskatoon’s Brightwater Senior Living Centre, as well as with patients at other local facilities who are dealing with dementia. Anna-Belle is a bit of a doggie celebrity, with her talent for riding a skateboard in high demand when she visits.

“I’m hearing about the elevated moods of patients after the dogs and I leave, as well as the positive impact our visit has on the morale of health-care providers,” said Dell, strolling down the hallway of the Calder Centre as Subie tugs her towards another room, where he senses there will be more cuddles. “I’ve even brought the dogs into classes I taught at the U of S. You wouldn’t believe how it changed the energy in the room.”

It’s actually not that hard to believe at all.

Walking into the adult wing of the Calder Centre, the mood is distinctly less raucous than on the youth side. Entering a darkened room, two clients are flopped on separate couches, watching a DVD. Subie’s appearance brings both individuals immediately to life, as they sit up and lean forward for a pet. The middle-aged woman occupying one sofa laughs loudly as Subie showers her with his trademark affection. "Subie, Subie, so handsome," she says. The energy in the room has noticeably shifted to something that is much more alive.

“I’m really interested in that energy,” Dell explained after Subie’s visit was over. “Where else could you walk into a room and get that kind of instant, positive reaction? If I walked into a room to give a talk to Calder clients, or even brought other treats, you’re not going to get that reaction for me. But bring in the animal and everyone’s up.”

As she observes the interaction and bonding between the Calder Centre clients and Subie, Dell admits that she can only use her extensive background in research and addictions to attempt to interpret what is actually happening between them. “I probably get five per cent of what’s actually going on,” she said.

Dell relates the story of another therapy dog used by the Saskatoon Health Region and a six-year-old girl who had witnessed a lot of violence in the home. No matter how hard the therapist tried, or what strategies or vocational tools she used, the child would not budge. One of the Health Region’s therapy dogs was introduced and generated immediate results. “That little girl told the dog the entire story. She knew what she was supposed to do. And she was finally comfortable enough with the therapy dog to do it.”

Moving into another darkened room at the Calder Centre, another DVD plays on the flat screen television. Blackout blinds filter out the light and the late-August heat for the half dozen clients slouched on the furniture. Once again, as Subie lunges into the room, it comes to life.

"Subie, you remember me don't you?” asks a young male client. Subie begs to differ, breaking the rules and hopping up onto the sofa to lie on the man’s outstretched form. Again and again Subie repeats his ritual, moving around the room, generous with his attention and ensuring every client receives personal attention.

"They take away some pain and distract you from your day, especially if you're having a bad one," says a female Calder Centre client who has dropped her knitting to sit down on the floor and embrace Subie.

"They listen and they don't judge," says another.

After his visit with Calder Centre clients is finished, Subie stretches out on the carpet of one of the centre’s boardrooms, clearly ready for a nap.

“When the dogs get home, they’re exhausted. They give so much, so intuitively,” said Dell. “If you came to my house, you’d see a different dog. He’d bowl you over at the door. It’s amazing how quickly he learned. Now, as soon as I put my St John’s shirt on and he hears my lanyard, he immediately switches into therapy-dog mode.”

Dell wants people to understand the positive impact therapy dogs can have on people dealing with issues like addiction. But she also wants pet-owners to appreciate how therapeutic having a pet in their life can be and to pay more attention to those benefits.

“I’ve learned so much from watching how the dogs interact. Often if you’re in a meeting or speaking at a conference the people you’re addressing are just looking around, not even acknowledging the person speaking. Watching Subie, he’s all about a one-on-one presence. Being with the therapy dogs has taught me to be more present, not judgmental. It’s taught me mindfulness. I really see it with Anna-Belle — she is fascinating. She methodically goes from person to person at the seniors centre. No one is really calling her; she just knows.”

Dell’s opinion on healing moves beyond vocational therapy. “I think one of the most important ways people heal is from their relationships.”

She points out that clients at the Calder Centre are learning from their peers and from their therapists as living beings as much as they may be learning the coping skills. “They’re feeling love, joy, those basic human values. What’s going to heal you? If I’m in pain, it’s not going to be a program; it’s going to be my friends, my family and yes, my pets who are going to support me through that. All the normal stuff.”

Dell circles back to the teenaged boys at the beginning of the visit, telling the stories of their pets at home. “Everyone has a story about their dog. Seeing Subie is a connection, a reminder of who they were before they were in treatment, even before they were addicted. It’s about the normalcy, connecting with the real world again. That’s so important, because when you come in here you’re sheltered.”

You don’t need to be a therapist to train and own a therapy dog. All the information is available on the St John’s Ambulance website (www.sja.ca). “The certification is free of charge,” said Dell. “They’ll send you a DVD so you can watch what kind of training you have to do with your dog. If your dog doesn’t pass the first time, you can try again.”

Starting in September, Dell, Anna-Belle and Subie will pop up once a week in a different location on the University of Saskatchewan campus to entertain and comfort stressed-out students. Dell also plans on continuing her work with the Calder Centre and seniors once she is off sabbatical. Her next challenge is measuring the results.

Meanwhile, you can follow the daily therapy dog adventures of Anna-Belle and Subie on Facebook (https://www.facebook.com/AnnaBelleSubiesAdventures), which is managed from the point of view of the two dogs. “I started the Facebook page because everything is community-based research,” said Dell. “I wanted to raise awareness and to put ourselves in their shoes, because we are asking them to do these things. That said, I am without a doubt that both dogs love doing this.”

To read the original article in the Saskatoon Express, please click here.

Dell and Anna-Belle will also be holding PAWSitive Thursdays on campus throughout the 2013/14 academic year. You can check PAWS Bulletins for updated information on where to find them every week, and can also make suggestions as to locations they should consider visiting. For more information, please click here.