The following article about Archeology student Danee Wilson appeared in The StarPhoenix on Sept. 5: 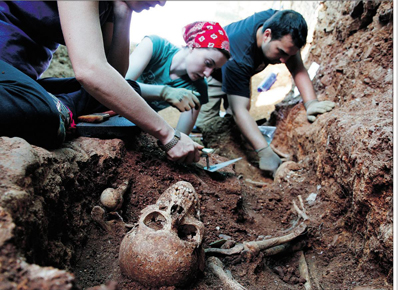 University of Saskatchewan archeology student Danee Wilson, middle, spent the month of May volunteering in Spain with the Association for the Recovery of Historical Memory, an organization working to recover the remains of victims killed during the Spanish Civil War and in the years following during Gen. Francisco Franco's dictatorship.
Photograph by: Submitted, The Leader-Post

On a hot, dusty day in late May, Danee Wilson and a team of volunteer archeologists begin their search. It is the last of three planned digs in which Wilson, a University of Saskatchewan archeology student, travelled to Spain to participate. If anything, the previous two outings were surer bets than this one. But they didn't find anything.

Wilson is wary as she fights the summer heat and walks to the edge of Abenojar, a small town in south central Spain, where a mass grave of human remains is believed to be located. She is not sure her trip will go as planned.

But this time is different. On the third day of digging in a cramped enclave near the local cemetery, the team discovers a skull. As their shovels and pickaxes go deeper, they unearth the bodies of three victims killed in the early 1940s during Gen. Francisco Franco's regime.

"On one hand, you're excited because you've finally found what you're looking for, and perhaps will be able to recover the victims and go through the process of ... returning the body to the family," Wilson said in a recent interview.

"However, you're also looking at three people that were murdered 70 years ago, and you have to think about their story and their family at the time and what had actually happened to them. So it's emotional as well, and difficult to take that in and continue to work. It's definitely a mixed bag of feelings."

Wilson, 26, spent the month of May volunteering in Spain with the Association for the Recovery of Historical Memory (ARMH), an organization working to exhume the remains of victims killed during the Spanish Civil War and in the years following during Franco's dictatorship.

Since 2000, the ARMH has found over 150 mass graves and recovered 1,324 bodies. According to association vice-president Marco Antonio Gonzalez, it is difficult to quantify how many bodies are still missing, as their deaths were not documented by government officials. Based on the work of historians, however, the ARMH believes the remains of over 100,000 victims have not been recovered.

Gonzalez expressed his appreciation that international students have volunteered their time to further the cause.

"We are always proud that young people from other countries are interested in the subject and want to use their free time to help us," he said in an email. "They transmit this support to the family members of the missing."

Wilson found in the association a platform to explore her two passions: forensic anthropology and human-rights work.

She is hoping to return to Spain next summer for a second volunteering stint with the ARMH.

"I've always been interested ... in the importance of not forgetting what has happened in the past," Wilson explained. "I think that's the biggest problem that has happened in Spain - that because the dictatorship lasted so long after the war, people weren't able to talk about what had happened and they weren't allowed to recover the remains of their family members."